Two boats, typical of the Exe Estuary, can be seen in the garden: the Ruby, a salmon boat built by the local Trout family and a rare example of an Exe Estuary market boat. In the River Gallery, the Cygnet, was a tender to an unusual yacht in the shape of a swan, owned by Captain Peacock, a noted local inventor. Above the Cygnet hangs a gentleman’s skiff used on the Canal. The small dinghy near the lift was made by a member of the Trout family, whose boat building firm is still working in Topsham today.

Fishing has been a major activity for local people with boats venturing as far as Newfoundland. The famous Topsham salmon is displayed adjacent to the welcome desk; this fish, caught in 1924, weighed 27.8kg (61lbs 4ozs)! Salmon fishing on the Exe continues today and is described on the display panel.

The large space on the upper floor is a sail loft, built in 1858. Heavy iron rings for stretching the sail canvas can be seen, and ship models illustrate local fishing and trading sailing vessels. On the walls are half-models of ships built in the local Holman yards. In the centre space near the stairs is a model of the Terror, a ship built in Topsham, with an account of its history as a Royal Navy gunboat and later Arctic and Antarctic exploration vessel. It was lost with the rest of the Franklin Expedition seeking the North-West Passage in the 1840s. We were thrilled in 2016 when it was located on the seabed in the icy waters north of Canada.

Display cases illustrate Topsham’s history from prehistory, through settlement in Roman times, the town’s medieval charters and later development. Items connected to the trade in serge cloth from Devon to Holland in the late 17th and early 18th centuries indicate how this gave Topsham both wealth and national significance.

Exhibits range from pottery shards and quern stones to a penny farthing bicycle. In the centre of the room towards the rear, is a scale model of the town in 1900. Made by members of the local History Society, it took two years of work, measuring and plotting every building. Maps on the walls show how the town has developed. In 1842, the Troika tithe map, based on an earlier tithe map, shows property ownership around Topsham. 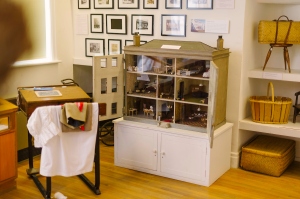 The garden side of the Sail Loft shows the development of Topsham’s maritime history. A hands-on barrels and trunk exhibit explores Topsham’s trade. Displays also illustrate the Exeter Canal (on the far side of the Exe), the coming of the railway, sail-making and the varying fortunes of Topsham’s shipbuilding, boat services and other trades (of which lace-making was one). See also Daniel Bishop Davy’s memoranda of the ships built from 1817 on the Exe – a prized possession of the Museum. Memories of school days, a collection of vintage toys and a dolls’ house modelled on Wear House (now Exeter Golf & Country Club, about a mile from Topsham) are particular attractions for younger visitors.