The house is an excellent example of the late 17th century merchants’ houses that line Topsham’s Strand. The Enright Room provides an introduction to the house and its previous inhabitants. You can hear memories recorded by the last resident, Dorothy Holman, whilst sitting in a theatre seat once owned by Dorothy’s sister-in-law, the actress Vivien Leigh.

A bedroom and parlour are furnished to show how a merchant family might have lived in about 1700. Illuminated on the wall is rare 18th century Dutch enamel painted glass from a nearby Strand property. 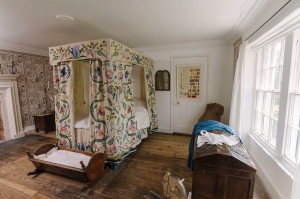 Displays in the bedroom show typical styles of decoration for the period. The embroidered reproduction bed hangings are the results of a research project into design, crewel work embroidery and materials of the period. Motifs include English oak leaves and acorns, tulips to mark the Dutch connections and avocets as a Topsham touch! On the landing a wall display shows Dutch tiles from another local house.

The panelled parlour with its view of the estuary (then lined with noisy boatyards) adds to the atmosphere of living in the early 18th century. Visitors can see a King James Bible of 1726 and a Longcase Clock in a walnut and mahogany case with a brass and silver dial made by Edward Upjohn of Exeter. The magnificent English cabinet dated 1688, on loan from the Victoria & Albert Museum, is influenced by the Dutch style of elaborate marquetry and is made of walnut with holly and rosewood.

At the bottom of the stairs the front door of the house opens to the side of the building like most of the neighbouring merchant houses, rather than directly onto the street.  In a display case in the hall is the Follett sash with the description of its bloody history together with a Topsham made clock and other artefacts.To the right of the hall is the front room dedicated to Dorothy Holman, the Museum’s founder. Furniture from her drawing room reflects the lifestyle of an Edwardian family and includes a portrait of Sophie Holman (her Father was a Mayor of Exeter) as well as other Holman memorabilia.

A late 18th century tide clock, made locally by Richard Trevor, stands in this room and shows times of high water at Topsham Bar. It was used by merchants to calculate when cargo-laden vessels could reach the Quay.

Also displayed is the night dress worn by Vivien Leigh in Gone with the Wind.Vivien’s first husband (before she married Laurence Olivier) was Leigh Holman, a brother of Dorothy Holman. The sisters-in-law maintained contact after the marriage to Leigh Holman was dissolved and Vivien’s daughter donated the nightdress, photographs and other memorabilia to her Aunt Dorothy’s museum.

Across the hall is the room showing changing exhibitions each year. It also houses the local history room with information about Topsham streets, trades and families and a library of local and reference books for visitors’ interest. 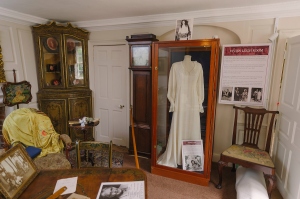 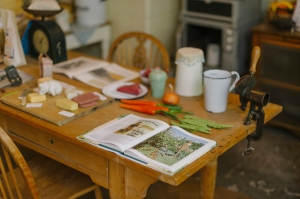 The kitchen presents a later picture of life in the house, concentrating on the 1940s and 1950s, with exhibits that will bring back memories for some of our older visitors. Recollections of wartime cookery and basic cooking utensils intrigue visiting while a 1913 booklet for a housewife and her staff makes interesting reading for modern families.